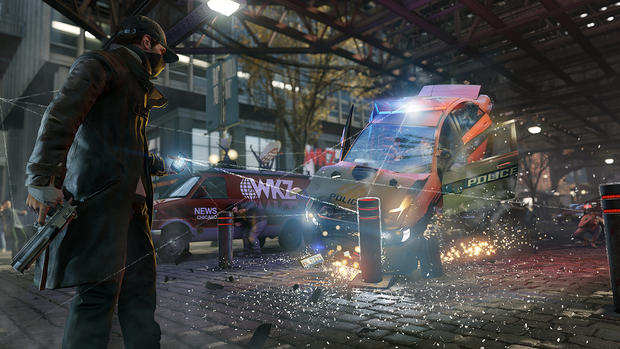 There was an underlying theme in Wednesday’s “longest day” of the Electronic Entertainment Expo, and that was distractions.

Distractions are merely the new, finest way to overcome the darn A.I. in many of the hottest next-gen games. From the blistering phat beats of an ol’ school boom-box.. to surveillance-controlled canines.. to a good ol’ fashioned Chi-town blackout (exactly what my Boston Hockey Bruins could use right now!), there was more than an assortment of neat tactics to help your desirable antihero of choice.

WHO LET THE HACKS OUT?

Despite the many demos carrying an all-too similar trend, perhaps no game did it better than Ubisoft’s long-awaited Watch_Dogs. Sure, it’s yet another Grand Theft get ’em-when-you-can open world feature — and actually, highly resembles last year’s surprise hit, Sleeping Dogs. But, trust me; you’ve never played a game where your primary weapon was your damn cell phone. Watch_Dogs is a hacker’s dream, and possibly even a hacker’s nightmare. Not even Tron or The Matrix could handle what Aiden Pierce has up his sleeves.

In fact, Pierce will have a hard time handling his own (often) sensational, surprise hack guests. Even the police will use the same tactics as our protaganist, including all the technology from CtOS — software that controls Chicago’s entire informational network.

No wonder those Cubs fans have always been brainwashed!

So, hey, for a guy with no morals, Pierce often tries to do the right thing. For every security guard he puts out of their own misery — all to acquire access to certain district’s CtOS — the man doesn’t mind breaking up a domestic dispute or two. He’ll chase burglars through playgrounds, play Enemy of the State with a fellow hacker pal, and gain vital access codes from dangerous ex-mercenaries. South Beach’s Michael Weston would be proud.

If the wild goose chases and wifi hotspot hacking isn’t nearly enough, Watch_Dogs wins on a technical scale, as well. While the graphics are merely solid with a spell of impressive character (and car) mechanics, certain missions often provide sweet camera angles (especially under illuminated survellience), terrific spy-infused music (though nothing too Bondy), realistic city life (you’ll feel like you’re in a jam-packed Coffee Bean), and a slew of spectacular sound effects: accurate police dispatch alerts, echoes of gunfire, swarming sirens and even a muscle car’s roaring transmission.

Of course, your own personal iPAD or Nexus or Kindle whatever will come into play too. Tablets, basically, work for ANY next-gen game now — so get used to it. You can receive help from a “hopping in” mobile player, who can pitch in with those utter distractions; or you can become challenged by another fiesty jerk tech. Don’t act surprised when your “tagged” armed guards get startled silly by a ghastly moving forklift, or play too smart for their own good and start shooting blindfire; even them thugs go dumb over false car alarms. Either way, it was cool getting to know the people of Chicago, like “Roberto Kim” trolling online politic threads, or personal trainer — and potential assault victim — Sally Windex enjoying some weekend fishing.

Watch_Dogs takes the standard open-world assault to a more ambitious level. Hackers will know for sure November 19.

IF YOU GOT A CREW, YOU BETTA TELL ‘EM

Along with Tom Clancy’s The Division, which I oohed-and-aahed about during the Ubisoft press conference, the software giant’s other present for E3 was The Crew.

I got a first hand look at the massive-multiplayer online racer this morning, which has the most overambitious plot of all time: gather together with other afterburners throughout the entire — and we mean entire — United States to race against one another for no apparent reason than the pure joy of raising utter destruction and tossing out bragging rights. We kid; there’s a trusted story yet attached. But, yes, The Crew certainly does contain the entire sweep of the good ol’ U.S. of A., including the canyons of Red Rock Las Vegas, the metropolitan mayhem of Manhattan, and the crashing waves and tan babes of Ocean Drive.

It’s as ridiculously epic in scope as it sounds, and a helluva lotta fun.

Any fans of Burnout, or the classic Need 4 Speed‘s should really be enthralled with this game. It requires next to no loading screens during your time zone warps, and any of your pals or prowesses can challenge or “cooperate” at will (see: MMO). While I found the game to drive a lot harder than, hell, Saints Row IV (a far improved driver than GTA), I’m sure it was my overambitious index doing all the side-swiping. Even cooler.. *tablet alert, tablet alert!* you can customize your car from work, the treadmill or the john before even turning on your new console.

Ubisoft’s open-world racer also looks quite stunning on next-gen, without any major hiccups or glaring pixelation. With an original pitch written all over it, this Crew is a must ride early next year.