One of the great action elements of the original RoboCop was watching Murph going out and taking down muggers, rapists, and robbers. This movie spends SO much time on his creation, his training, and getting all the technology right that we’re over an hour into the movie before he even starts fighting crime. Yeah, I get that it’s cool how he’s just too long and the film gets stuck. Whiff.

The last thing to really bitch about is the “villain.” Boddicker was one of the best baddies ever. Just one nasty fellow. He drove a lot of what RC had to fight against in the original. The noob, Antoine Vallon (Patrick Garrow), doesn’t offer half of that badness in him, about as regular a villain I’ve seen in some time. He’s maybe one minor step up from a Syfy weekly episodic foe. And without that big threat on the horizon, what is there for the hero to even go against? Strerrrrike three. 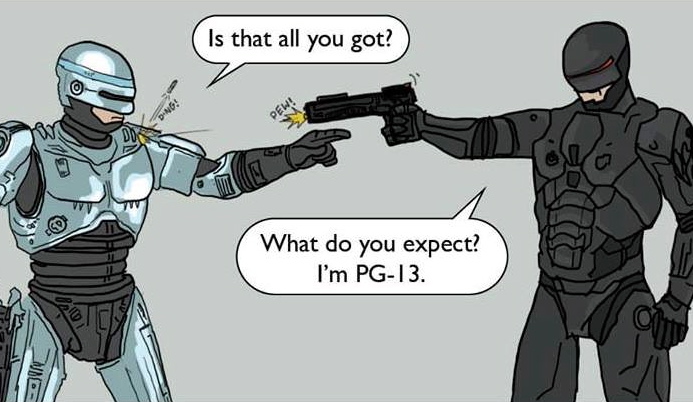 If there’s any one positive in the remake, it’s in the supporting cast. There are a ton of great actors involved, with Gary Oldman as Dr. Norton who creates him, Michael Keaton is the OmniCorp head, Abbie Cornish (Sucker Punch) plays Murphy’s wife and Samuel L. Jackson as a Bill O’ Reilly TV personality. Some of the CG elements available to the franchise this time also indeed helped, as well. In showing how RoboCop “sees” — be it thermal or night vision, etc. — and the abilities with his computer system, this Murph is able to access video surveillance, arrest files, and GPS with ridiculously efficient speed.

Some other elements from the original include the theme music and many of its sound effects, like the thunderous walking and his robot body turning and moving. Unfortunately, even the cutest little nuances aren’t enough. Being such a devoted fan to the original (though perhaps nowhere near our resident @Robocop_Murphy, Cooke the Cleric), I couldn’t help but imagine what this film would have been like had they used today’s technology with the same story intact. Talk about an opportunity missed.