OK, tis’ the season to get some eggnog or hot cocoa and watch Holiday Movies while escaping the bitter chill outside (well, maybe not so bitter here in LA). We at GHG are no different in our love of Christmas movies as you lovely folks, thus here is our list brought to you by our reigning nostalgic “Neophyte”, Nicole Brunner.

You’ll certainly need to check on some Netflix after this.

10. Just Friends - Well, it’s the Green Lantern and Deadpool aaaaannnd…I’m stretching a bit here, but this movie is awesome nonetheless. Ryan Reynolds in a fat suit — and Anna Ferris in all her raunchy glory —  are to die for. I absolutely had to put one Rom Com in the mix just for shits and giggles (and to piss Moody off), but it’s from a dude’s POV! If you ever had a girl you loved, but you somehow fell into the friend zone, then, well, this one’s for you — especially if you’re a former fat-kid-turned-hottie. This movie takes all kinds of twists and turns that will make anyone lose their shit over a unrequited long lost love from the past. Let me put it to you this way: You won’t need to visit Jersey for X-Mas ever after watching this flick! 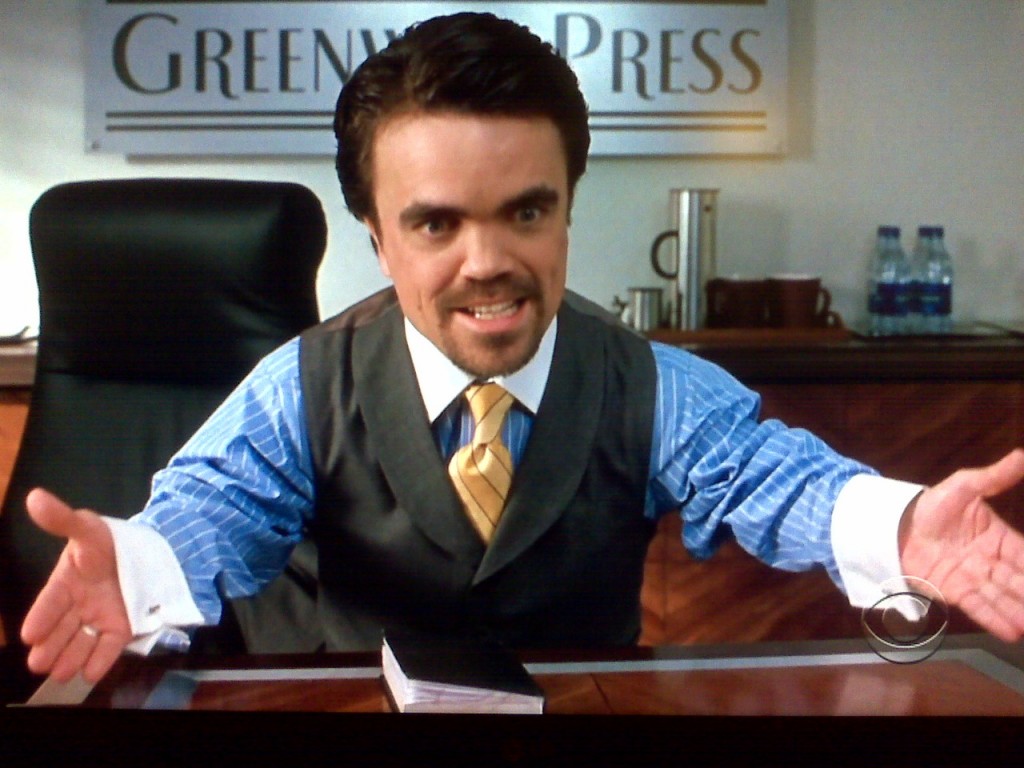 I’ll be throwing your X-Me.. X-Mas list in the TRASK!

9. Elf - I really can’t stay, ohhh… but it’s cold outside… This Jon Favreau flick is such a heartwarmer that it’s slowly becoming the new A Christmas Story with all the airplay its receiving. It may not entirely be a geek film per se, but gets the spot because, hell, it’s directed by the man who delivered us Iron Man, and Will Ferrell is beyond hysterical. Peter Dinklage has an unforgettable part pre-”Game of Thrones” fame and all, to boot! 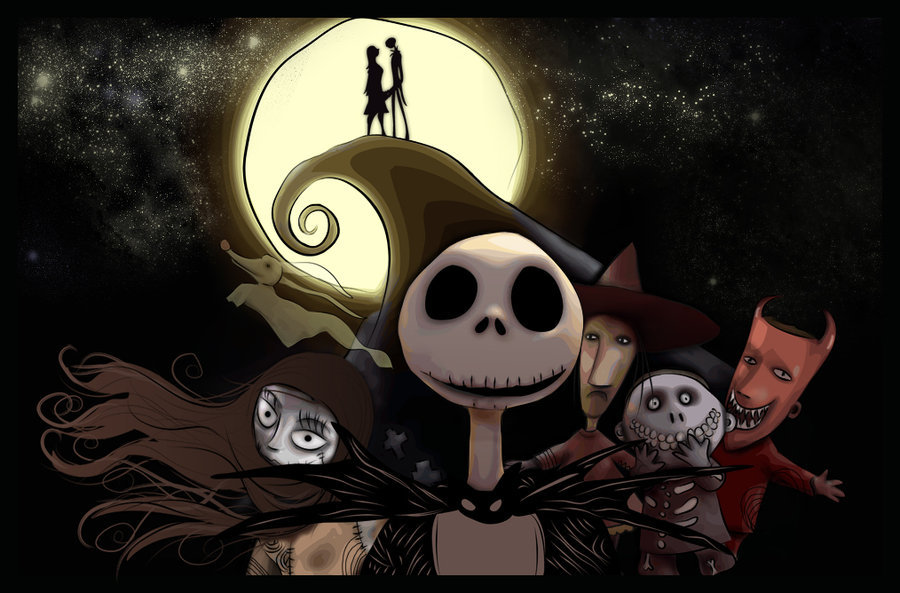 Oh, just another holiday evening at the Gailman’s.

8. How The Grinch Stole Christmas - It’s Grinch Time, and here, I’m talking the Jim Carrey adaptation directed by Ron Howard. Don’t get me wrong, though, I love the classic cartoon too. The visual imagery in this film is like a Christmas assault on the senses. Also, the more I watch this movie, the more I realize no one else could’ve played the part of The Grinch better than Carrey. This one is fun for the adults and the kids — analogous of a X-Mas rollercoaster ride.

7. National Lampoon’s Christmas Vacation – Save the first film, this is my favorite in the long saga of Clark Griswold. Nothing quite encapsulates the feeling of Christmas more than unwanted relatives staying in your home, and — my favorite part– the electrocuted kitty. “That thing had nine lives; you just spent em’ all.” As with all the vacation movies, the story illustrates what we wish things to be and what they actually are. With that said, this may actually be the most accurate Christmas film ever made, and the Griswold’s are the perfect family to bring alongside the Yuletied. Complete with a very young Johnny Galecki as Dusty, shit couldn’t possibly get more geeky, could it? 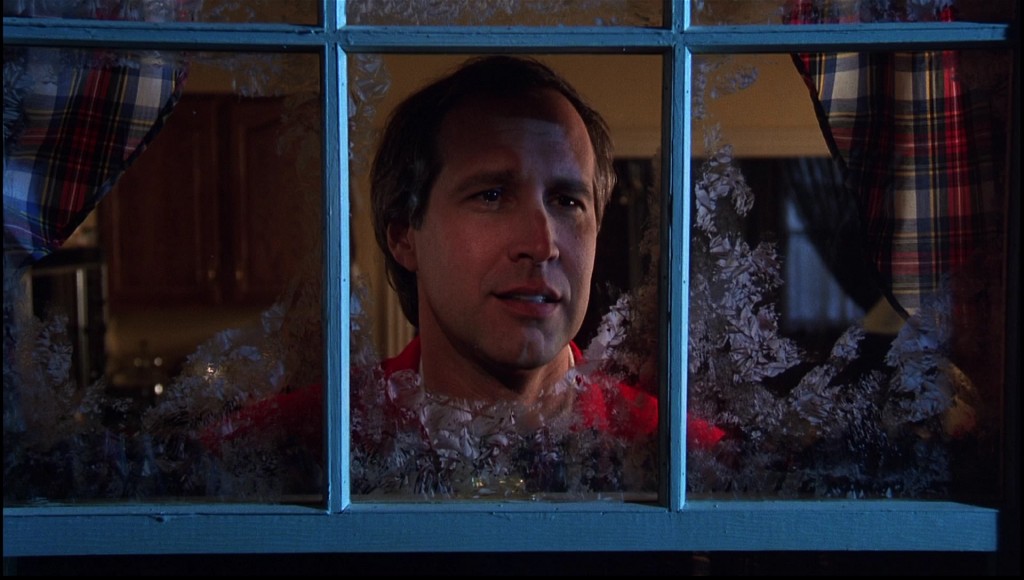 6. The Nightmare Before Christmas - Believe it or not, this wonderful Nightmare was not directed by Tim Burton, but written and produced, primarily because he was busy with our Ed Wood and the #2 choice on my list (which you’ll have to wait for, congregation!). This is one of the best animated films of our time, and basically re-birthed the craft of stop-motion puppeteering. Nightmare combines my 2 favorite holidays in one awesome package: Halloween, or Christmas. Now that’s what I call a movie double-duty! Kudos to Burton for writing this timeless piece. And, the reason for all of Eva’s singing? Danny Elfman, a man who certainly knows how to keep Christmas well.

5. Die Hard - Ain’t no other X-Mas movie has what this film has, and with good reason: Alan Rickman, duh(!) and the simple fact Die Hard is one of the best action films of our time. The classic full throttle flick spawned a very successful franchise (not bad for a X-Mas film, eh?). Nothing quite conveys the true meaning of Christmas as much as a machine gun and decking the hall chock full of effing bullets. Sure, this one may be intended for the fellas, but I like it too. A classic Bruce Willis can’t be beat. 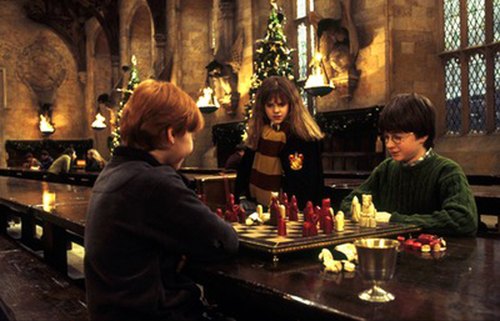 4. Harry Potter and The Sorcerer’s Stone - It’s yet another movie featuring good ol’ Rickman, this time as the “Half Blood Prince” himself, Professor Severus Snape. The Sorcerer’s Stone is also the primary reason why I fell in love with the franchise, seeing as I didn’t read the books ’til later. And there was nothing like seeing Hogwarts all fancied up for Christmas with all the trimmings and food. Harry Potter makes an especially darling orphan having his first real Christmas with his best friend in a magical castle, and he receives an invisibility cloak from an unknown source, as well. Who wouldn’t want that?

3. Gremlins - I found myself a lovely little gem from the 80’s: little crazy monsters terrorizing a small town, brought to you by Steven Spielberg and, once again, Chris Columbus. The movie also pays lovely homage to one of my non-geek fav X-Mas films, It’s a Wonderful Life. If you don’t know what I mean, just watch both films and see. It’s great fun! Phoebe Cate delivers one of the creepiest monologues ever uttered in a Christmas film ever — certainly enough reason for a spot on our list.

Hey, if Swizz Beatz can steal ‘em, why can’t I?

2. Batman Returns - But, before anyone gets ahead of themselves, the ‘Phyte know this particular movie is riddled with flaws, but it’s Batman at Christmas time dammit! Gotham is simply gorgeous dressed in snow in holiday splendor (Don’t believe me? Play Arkham Origins). Alfred trimming the tree is an especially heartwarming image for any fan of The Batman. Tim Burton may have made some fatal mistakes, but also some very mind-blowing choices as well (i.e. Michelle Pfeiffer as Catwoman, in a costume and portrayal so hot.. it will warm any Grinch’s cold heart). Miss kitty dazzles us in vacuum-sealed black latex that inevitably gets torn apart, and is all the more sexy that way. Selina Kyle is a lonely cat-lady secretary that gets offed by her boss Maxx Shreck (played by the infallible Christopher Walken) right before Christmas; who wouldn’t be pissed off by that? Either or, Returns is a fun flick that packs a total “geeked out’ X-Mas. 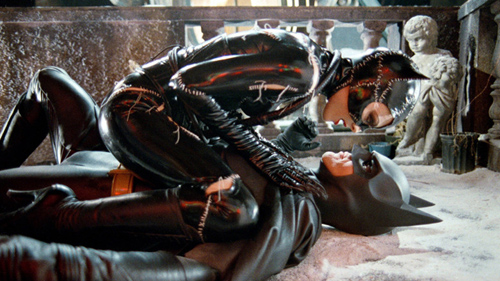 Not much of a Knightmare, after all.

1. Scrooged – I finish with the brilliance of this holiday laugher. It stars Bill Murray in his Ghostbuster heyday, reason enough to watch it in itself (A ghostbuster being visited by ghosts!). Another great reason some might not know, is that this gem was directed by none other than Richard Donner — who of course did Superman I & II, The Goonies, and The Omen (we don’t wanna scare the Dickens outta people; “The Dickens!” — No one gets me….) What better choice than Donner to present a modern take on Charles Dickens Classic, A Christmas Carol? The movie captures the heart of the original story along and will keep you laughing all the way. BTW! The score was done by Danny Elfman. Ho-ho-ho. 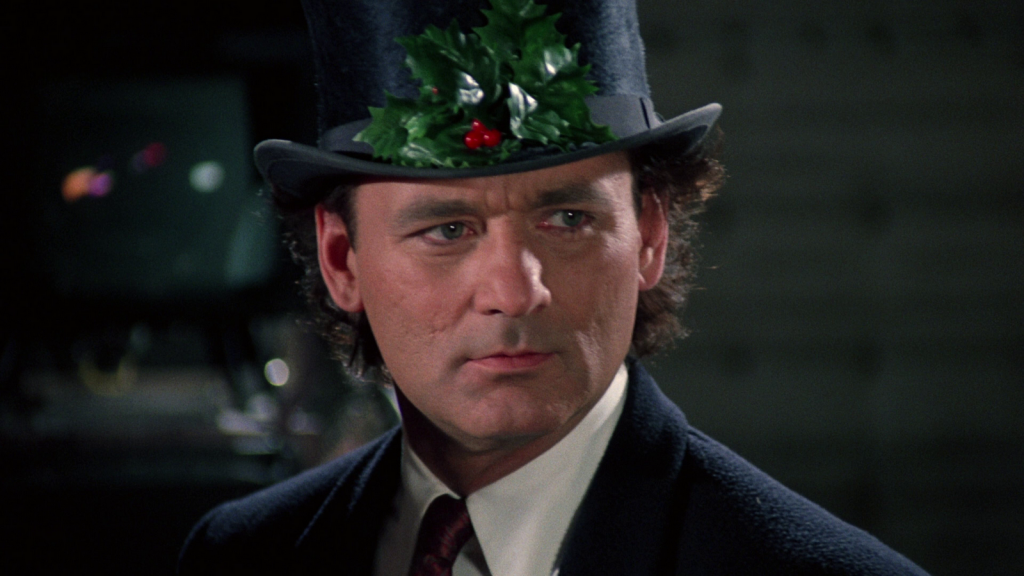 Aren’t ALL my movies “Christmas movies”?

Have a Happy Holiday and keep Christmas well!

Nicole Brunner is an actress/model and daughter of noted Marvel comic book artist Frank Brunner, which essentially makes her comic royalty and a badasssss bitch. Growing up in her house, comic books and the like were the literal gospel. She’s also guest-starred in 3 episodes of the cult favorite TV series"Roswell". Nicole is a regular at San Diego Comic Con, and frequents comic book stores in search of old comics and anything Jean Grey-related. Lest we not forget her fixation with 80s flicks and the new DC fighting game, INJUSTICE. Follow The Neophyte on Twitter @Nicole_Brunner