Georges St. Pierre said he got hit by a truck Saturday night. That truck was named Johny Hendricks.

GSP said he lost some of his memory during his five-round Championship bout with Hendricks. He went as far as to say he left some of his soul in the cage at UFC 167, where he retained the UFC Welterweight Title and won for a UFC record 19th time, passing former champ Matt Hughes.

Hendricks felt like he did enough to win the fight. A LOT of fans and experts agreed with him. UFC President Dana White agreed, going as far as to say the Nevada Athletic Commission’s ruling to award GSP a split decision was “despicably horrible” (White, himself, scored the fight 4 rounds to 1 in favor of Hendricks.) 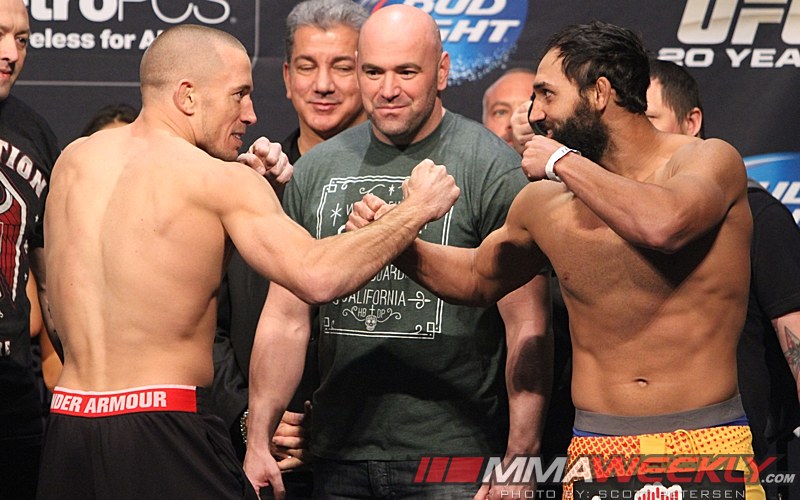 “Hey Johny! After this, we shoot some hoop, do 300 jumping jacks, and a few laps around the pool, eh?”

George St. Pierre said he needed to step away from fighting after the war with Hendricks. White and Hendricks were immediately calling for a rematch. A lot of fighters are in flux after a big fight because they put so much time into training… because of the adrenaline dump that just occurred in the cage. GSP will fight again. He’ll fight Hendricks again. The money will be there.

But I see a bigger issue.

In the days leading up to UFC 167, it was leaked to the press that Light Heavyweight Champion Jon Jones had backed out of his title defense against Chuck Liddell disciple Glover Teixeira. As of now, the date has been pushed, but insiders are calling bullshit.

“He’s a punk,” said a good friend of White’s with the caveat of anonymity when asked why Jones backed out of the tilt with the phenom Teixeira, who easily defeated Ryan Bader on his last meeting in the cage.

I’m going to put what he said in more politically correct terms, even if it’s not my way: Jon Jones isn’t a fighter. He’s an athlete who fights – so is GSP. 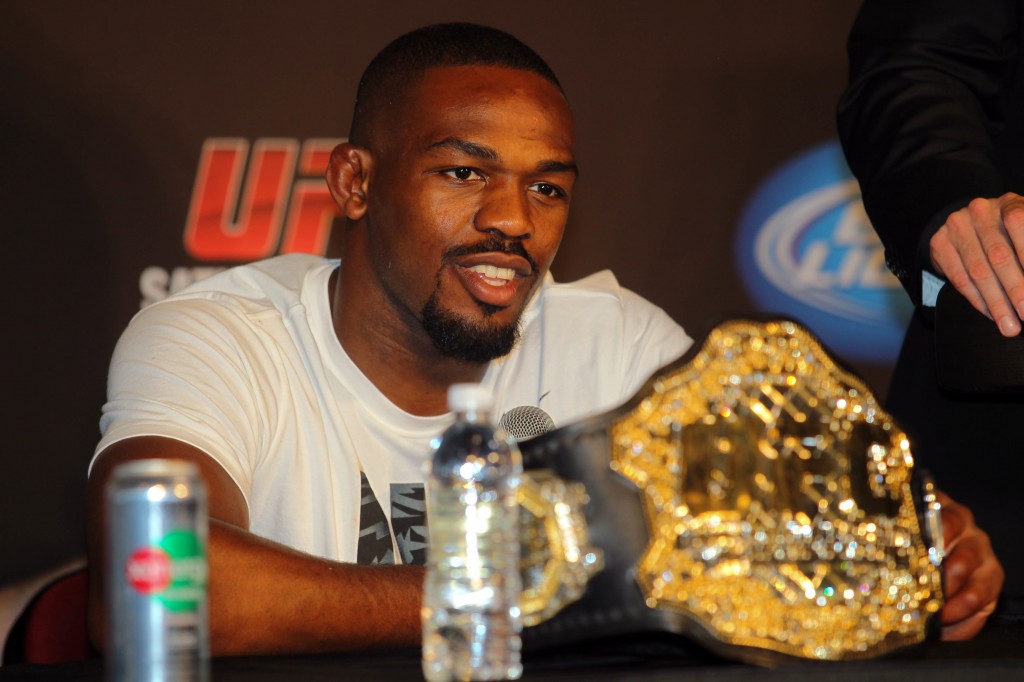 Almost had it spray painted “nWo.”

Here’s the deal: With UFC making MMA one of the fastest growing and most popular sports in the world, there are going to be more gifted athletes throwing their hat in the ring to be called “The Baddest Man on the Planet.” The problem with that is you are going to have a plethora of “Athletes” mixed in with “Fighters.”

GSP can adapt to any style. He is physically gifted, and no one on earth will do anything more than match him when it comes to mental preparedness and physical ability. Same goes for Jon Jones; having two brothers who play in the NFL only gives more evidence to the talented genes Jones possesses.

But neither GSP nor Jones are fighters.

The last time we saw Jon Jones in the Octagon he faced Swedish superstar Alexander Gustafsson. The fight was so closely battled that many experts felt Gustafsson should have taken the belt from Jones that evening.

I’m not one of those people. I feel that Gustafsson got the best of Jones that night, but I’m also of the archaic mindset that in order to be the champ, you have to beat the champ. Jones matched Gustafsson, jab for jab and kick for kick. Jones may have looked the worse for wear after their epic battle, but he’s the champ. He deserved to be the victor unless his loss was overwhelming and clearly contested.

GSP ran into the same issue with Hendricks. GSP was the more skilled fighter. He landed his jab when he wanted. He moved faster than Hendricks. His technical skills were above and beyond whatever Johny Hendricks could muster.

But GSP is an athlete, and Hendricks is a fighter.

Hendricks said he was only hitting GSP at about 70% because he’d never gone five rounds, and he wanted to make sure he had enough to get through to a decision against one of the best conditioned athletes on the planet.

Jon Jones is an athlete, and Glover Teixiera is a fighter. Jon Jones got his ass kicked by Alexander Gustafsson, and the Swede is ready and waiting to take Jones on in another title tilt. However, Jones isn’t so keen to get right back in the ring to defend the belt against someone so violent, athletic and skilled.

So, the UFC offered up Teixiera. And Teixiera is a whole other animal. He’s seasoned. He’s tough. He has one-punch knockout power, and, even with that, he’s found different ways to defeat opponents. 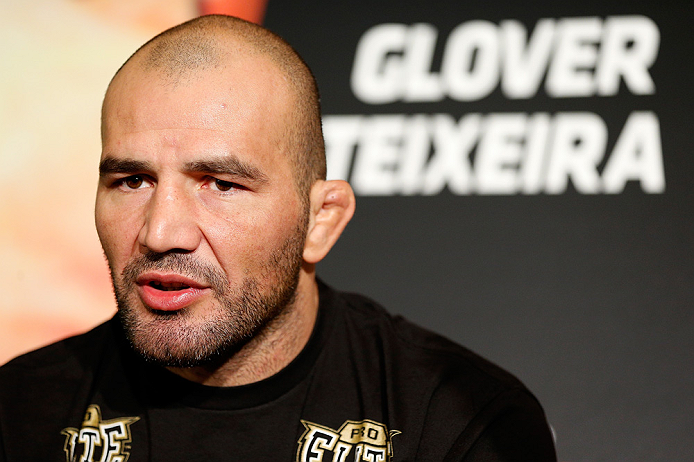 Also, Teixiera has a chip on his shoulder. While Gustafsson is by far the biggest fighter to fight in the UFC from Scandinavia, Teixiera comes from a land of fighters. Brazil has provided the UFC with everyone from Royce Gracie to Vitor Belfort to Anderson Silva. Teixiera had visa issues that delayed his debut with the promotion. Glover Teixiera is probably on the downside of his prime, and he’s still the greatest threat in the light heavyweight division to take away Jones’ title.

He’s on the downside of his prime, and Jones has backed out or at least pushed back the Championship tilt against Teixiera. The reason? Jones is an athlete and Teixiera is a fighter. Jones feels that he needs the conditions to be exactly right, and his body needs to be in the best shape it can possibly be before he steps into the Octagon for battle.

That’s not the way of the fighter. A fighter fights. It’s the reason why Dana White loves fighters like Clay Guida, Forrest Griffin and Chael Sonnen. If White needs someone to step in and fight someone on short notice, he knows the guys he can approach. He won’t waste his time on athletes like GSP and Jones.

Jones is going to be different after his Gustafsson bout. Whoever fights him next would be wise to hit him early and hit him hard. He might never be the same again. The longer a fight goes with Jones or GSP without the opposition pushing them to FIGHT is a recipe to lose a decision to the respective champs. 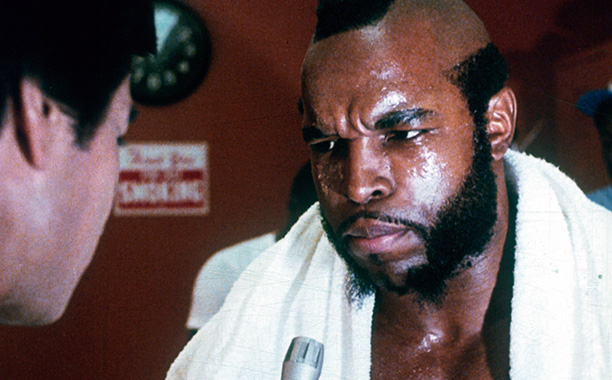 I pity that Rampage fool.

The next opponent should approach the match the way Clubber Lang so eloquently put it before his first fight with Rocky Balboa, “My prediction?… Pain.”

For the business of MMA, the fighter is always going to sell more tickets than the athlete. As a boxing fan, I can appreciate what Floyd Mayweather and Winky Wright did in the ring, but I’d rather watch an Arturo Gatti vs. Mickey Ward fight any day of the week.

People did not buy record numbers of Pay-Per-Views to watch Mike Tyson use his jab.

GSP and Jones and “athletes” like them are tip-toeing their way to being legends. The real legends are “fighters” who kick the door down and take on all comers.

Glover Teixiera could be the Brazilian Mike Tyson. If Jon Jones would stop being such a punk, we could find out for sure.

Previous: The Church Basement: Days of X-Flick Past…
Next: WWE SURVIVOR SERIES 2013 [Wrap-Up]: Missing the Tradition.

The "Brother" Joe Ross is for one...busy. A writer of all trades, Joe currently covers the UCLA Bruins for the Fox Sports Network, has written a Nike commercial for Bron Bron (with fellow parishioner "Saint" Luke Albright), has a share of TV & movie scripts in the works, and has been a UFC and WWE fan since you could say both Royce Gracie (Gracccccccieeeeee!!!) and Stan "The Lariat" Hansen. Follow Brother Joe @the_joe_ross and check His other blogs: http://thejoeross.tumblr.com/