Nothing like a drunken game of X’s and O’s.

Reading that title, I’m reminded of two things immediately off the bat. Both are hilarious in my book.

The second, is the Unity 2000 comic that tried to come out years ago. It’s a ballsy move to call to mind two vastly different things (one of which was a failed 6-issue mini that only had the first half come out, and then vanished off the face of the Earth due to the Acclaim/Valiant Universe getting shuttered).

But they called it Unity, so let’s UNITE and review this thing.

Matt Kindt (MIND MGMT, Justice League of America) and Doug Braithwaite (Wolverine: Origins, Punisher MAX) are the writing and art team on this horse and pony show, creating a comic book story that UNITES a universe of characters together for one major event. Like any other event comic, we’re lead to believe that this will have far-reaching changes within the Valiant Universe.

Will it? Will the series UNITE the strange worlds of Valiant into one big event? 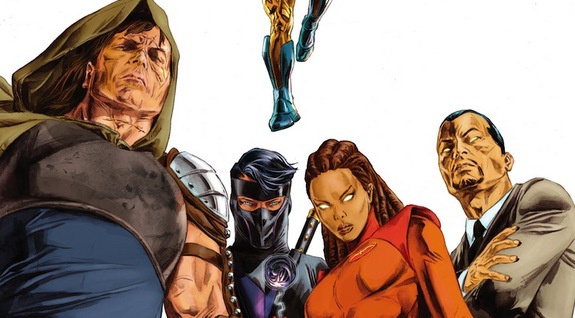 I don’t think it means to UNITE everybody. Archer and Armstrong make no appearance that I’m aware of. Quantum and Woody the same. Shadowman the same. But you know who does?

Motherflippin’ NINJAK!!!!! Throw Ninjak stars and shit. Kicking stuff and running up walls like a Spider-Ninjak!

Ahem…back to the review though. More on Ninjak the Purple Ninja later. 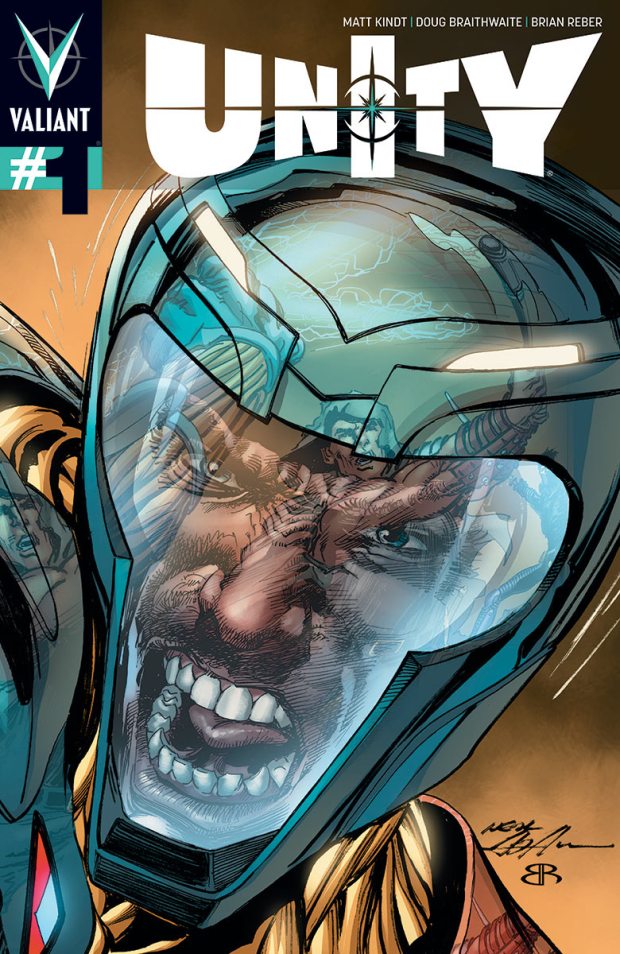 SOMEONE ran out of Corn Flakes again!

We get Harbinger and Eternal Warrior and a few other pieces of the Valiant Universe brought together to bring down X-O Manowar because he was being too awesome and stuff. So that’s where the story kicks off, really, but Unity #1 starts with a blogger taking pictures and telling the tale, giving us the Phil Sheldon-eye view of the event all but briefly.

And then we’re off and running.

I don’t like giving away spoilers so I won’t, but I’ll tell you that there are deaths, there are some ‘splosions, there’s implied sexing going on, and then there’s more death and dismemberment.

The writing is good but not the best thing Kindt’s done. Being that it’s the first issue in a mini-series event book, the question is: does it work? Absolutely. It sets the stage, puts the characters in place, wipes some off the slate and does what it needs to do to get the job done and to make the reader want more.

The art is superb. As always, Dougie Braithwaite is a talent that people forget about constantly (only because the Brit’s made the quiet life his priority). I’ve dug his art for years and followed him on projects — how sick was DC’s Justice? — just because I loved it. Braithwaite’s one of the few people who I feel can get away with pencils straight to colors.

Overall, Unity #1 is a respectable start. It UNITES the people that it’s supposed to, plus Ninjak’s in it, wearing his stealthy navy-violet outfit, probably with a unity ring on his finger, ready to punch some beyotches out so fast their heads will spin.

That, or just ready to Ninjak a bitch.

About Cooke the Cleric

Creative types come in all shapes and sizes. Some are total jerks. Others just don't understand the logistics of Skymall. CW Cooke is none of those. When he's not reading comics, he's writing them. Or complaining about them. Or watching entirely too many movies and spending entirely too much time describing the intricacies of the Terminator timeline. Follow @Robocop_Murphy