Like every year, 2013 presents Activision’s 10th installment of the insanely successful and all-addicting Call of Duty series with Ghosts. Brought to us this year by Infinity Ward and Neversoft, Call of Duty: Ghosts takes place in a post apocalyptic America where our main threat comes from none other than our Spanish-speaking neighbors from the South.

To start, The Abbot must tell you this Ghosts review is based on gameplay from the Xbox One console, as well as a mini-comparison to its 360 counterpart of yesteryear.

Now, because gullibility isn’t one of my strong suits, I will make this sermon brief and merely throw you the basics; cause as time (a decade) and sales (a billion) have proven to us, the COD franchise is virtually immune to reviews — good or bad.

CAMPAIGN (Because it has to)

When the title first leaked, many expected a resurrection of the popular Modern Warfare 2 character, Ghost, but alas it was not to be. The only link to that chapter of the series is the newly added — and ever so tongue-in-cheekly — attack dog, Riley, as Ghost’s real name was Simon Riley. You follow the story of two brothers, Logan and David ‘Hesh’ Walker. For the majority of the game, you are in control of the voiceless Logan (not even a ‘bub’ or a ‘snikt’!) who primarily follows the orders of his broheem, voiced by none other than Brandon Routh (Superman: Returns). Their motivation is the story of 14 soldiers who, very much like the Roman 300, were the last of their breed sent to stop the invading Federation forces. Although highly outnumbered, the Ghosts are so highly skilled that they are able to.. somehow.. come back from the dead to stop any enemies they encounter.

And as with any other a COD campaign, players should know that the storyline is nothing short of a visual can of Red Bull. Expect plenty of thrills, twists, and even gravity… 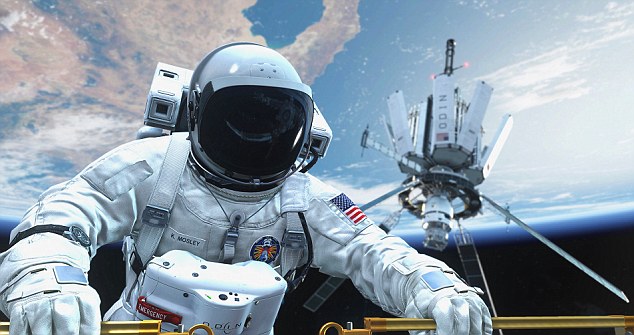 So nice of George to come by and say hello.

Perhaps because Battlefield — the only game resembling a contender to the COD franchise — has improved their series significantly over the past couple years in terms of their graphical engine, sturdier gameplay, and newly incredible 64-player online action, COD has done its best to make the single-player mission nearly their highlight. If you enjoyed the prevous campaigns in either Black-Ops, this, surely, will not disappoint. Speaking of BF, COD is even borrowing some mission ideas where you even get to pilot/man vehicles. Thankfully, these elements don’t feel forced, either, and definitely offer a nice break from the ground. And depending on your difficulty level (bro!), the campaign can be be finished in a night or two.

Also, word to the wise: much like any modern Hollywood blockbuster (I see you, Marvel!), do yourself a favor and wait until the end credits finish. Simply, jaw-dropping.

MULTIPLAYER (Because you want to)

To many floundering around our monastery, a solid campaign only serves as a “bonus” to the multiplayer online experience. In this respect, COD has been given small changes (beginning with MW3) with the addition of assault, support and specialist kill streak classes to the Black Ops II Pick 10 System. Ghosts brings back the various kill streak packages and their take of the P.T.S. 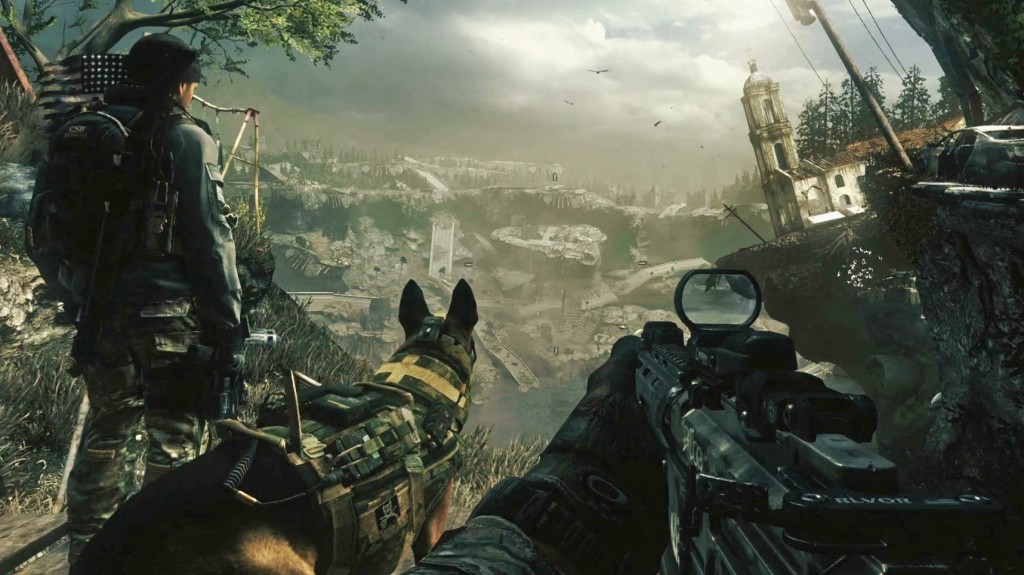 To the land of limitless chow, boy!

Your create-a-class options now give you the ability to have more than eight perks while still being able to carry a main weapon with attachments. The perks are all assigned a point value from 1-5. The standard set is six slots for perks if you’re carrying a main weapon, secondary, lethal and tactical. If you decide to drop one or all of these, you can add four more perks — again depending on point value of the perks chosen. Some of the most crucial perks have point values of 2-3 (i.e. Off the Grid is a 3-pointer). Thus, it takes up three slots in your perks allotment.

-PRETTY FUN (Because we can)

This go around, it’s all about finding the perfect combination of weapon perks for each soldier that fits your style of play. No more importantly, of course, because COD has finally gotten with the times and now allows females in combat. Along with your create-a-soldier having various customization options like skin type, face/ethnicity type, uniform, head gear, jerky of choice, blah blah, you can now also make your playable character the next GI Jane.

Players will also, once again, unlock perks, weapons, tacticals and lethals with a built-in currency system. Throughout your multiplayer life (or lack thereof, in all honesty), you earn Squad Points that allow you to unlock new weapons and killstreaks (or perks) based on your level. If you choose to unlock perks before their level unlocks, you will simply have to pay three times the value of the perk (i.e. Scavenger is a 2-point perk but if I want to unlock it early it will cost you 6 points). 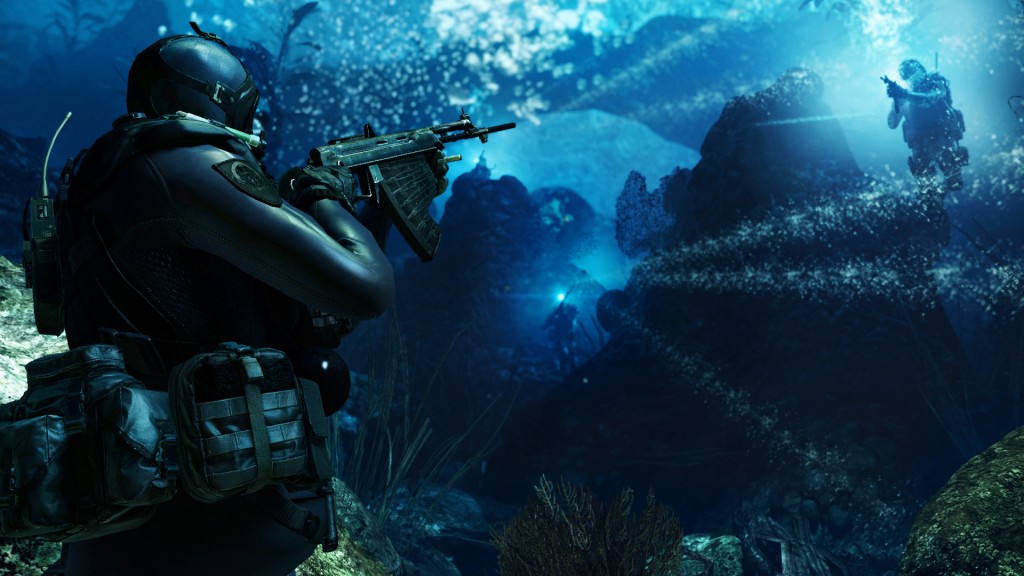 -ALL SYSTEMS A GO (Because they better)

The Prestige System is a little different this time around. Instead of taking your character and losing all your unlocks when you prestige, you are now given the option of building a 10-person squad. Each squad member can be prestiged one time; but once you’ve reached level 60-on, that squad member you can buy a new one to start the journey all over, as well as have up to six classes. If ten of your squad members has reached a prestige, you will hit the max: 10th prestige. Another side note.. the value of purchasing your next squad member or prestige goes up. Once you hit 5th prestige in order to purchase the next squad member, the point values jump from 100-500 in increments of one hundred.

-MY MAP.. IS BIGGA THAN YOURS (Because it be)

One of the biggest complaints about Ghosts so far is map size. Although many of the maps are indeed what The Abbot would consider medium, there are a number of maps that are bigger than Mark Henry’s breakfast. This may appear like a sniper’s dream. But due to hardware limitations on the 360 and PS3, the Ground War game mode was left out, thus leaving us 6-on-6 to wander around, nearly aimlessly at times, looking for enemies.

More on that later. 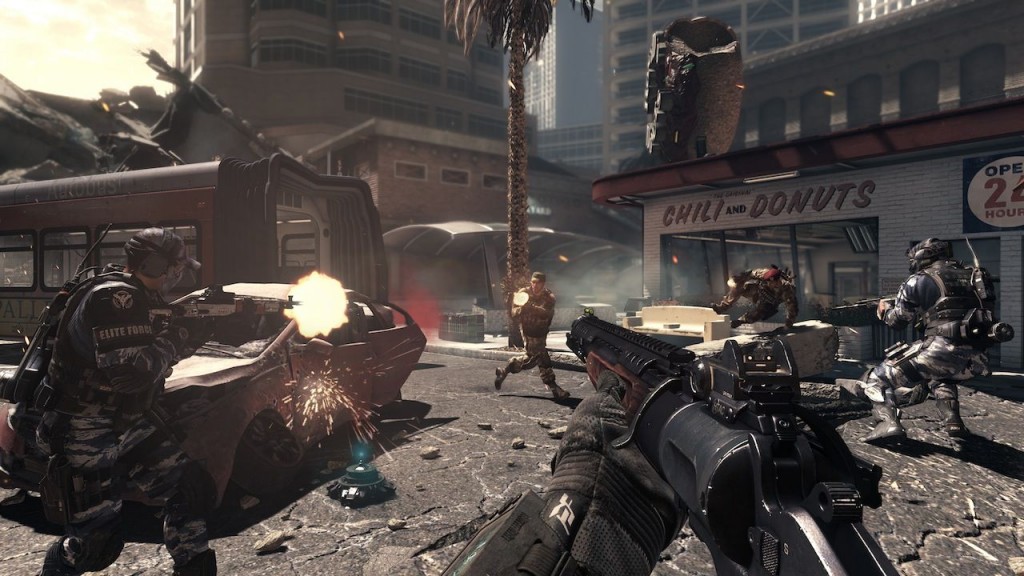 What the lethal combination of Chili and Donuts will do to some folks.

-GHOSTING GHOSTS (Because they invisible, dawg)

Many game modes are absent from Ghosts: Demolition, Headquarters, Sabotage and Capture the Flag. Search and Destroy was also missing upon launch. The wildly popular mode had initially been replaced by Search and Rescue, an S&D and Kill Confirmed hybrid game mode where your teammate could revive you if they picked up your tags. But, due to overwhelming public demand, Search and Destroy was promptly added.

COD: Ghost‘s brand new modes include Blitz, Cranked and Hunted. The community popular Infected game mode (from MW3) was also added to the regular rotation of returning modes TDM, FFa, Domination, Kill Confirmed, Team Tactical and a Ghosts Moshpit. So, hey! If you’re a fan of FPS and, even better, Call of Duty, this will not disappoint.

OLD vs. NEW (Because you’re waiting ’til after Santa)

Being a ringbearer for the franchise, I couldn’t wait to play Ghosts on the Xbox One given that it was released 2-weeks prior. Additionally, since Activision is teaming up with various retailers, you now no longer have to re-purchase the game. Most retailers will give you a voucher for $50 to upgrade your game to next gen — thus running you an extra 10 bones. 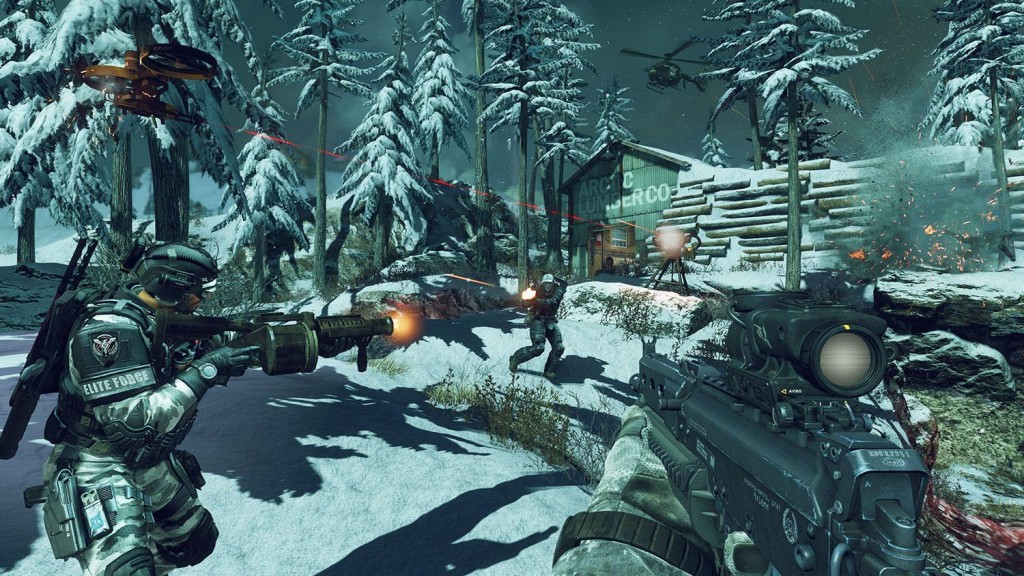 Heed this warning, however. If you’re expecting to be blown away by some of those next-gen graphics, I compel you to tread lightly. The difference between the 360 version of the game to the One’s are marginal at best (though I’m speaking strictly on the MP side of things, as I played the campaign solely on X1). I saw a smidge more details in guns and environments on X1 than I did on 360. Another tidbit, is that Ghosts on X1 runs at an upscaled 720 resolution as opposed to the 1080 native of the game on PlayStation 4. But, like Bobby Brown preached a thousand years ago: don’t be cruel.

Also, my brethren, don’t be fooled.

Despite any sort of difference in resolution, your overall experience playing the game should not change one bit. The “Tale of the Tape” comparison of Ghosts on PS4 and X1 show that Sony went with a darker, high contrast color palette, while X1 went with one a little brighter and slightly washed out. In the end, unless you’re playing the two versions next to each other you will not be affected by this…unless their name is Cardinal Gary, of course. 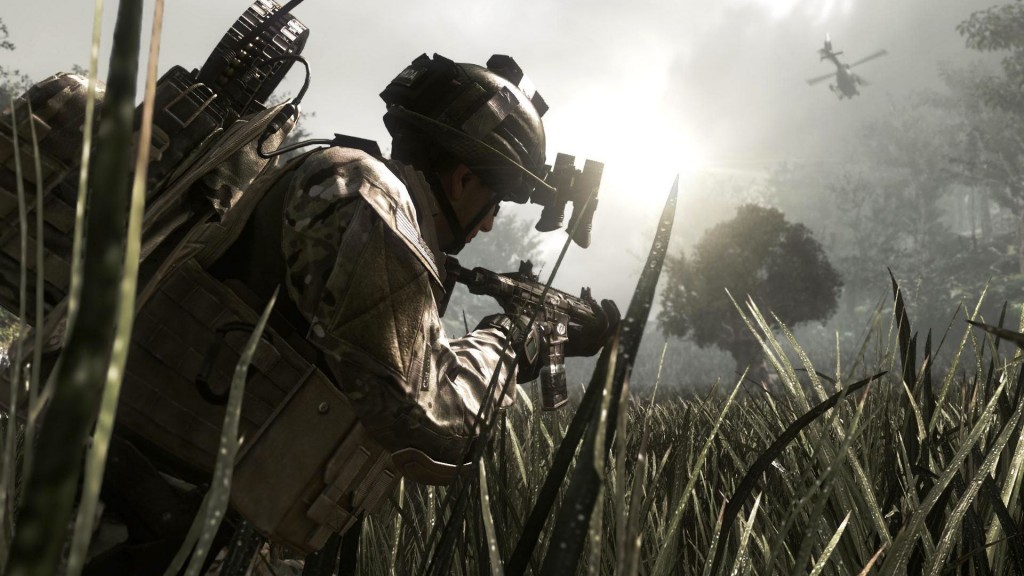 Pretty sure everyone else went to lunch.

As stated earlier, limitations on the current gen consoles kept the Ground War game mode from making it to those systems. Given the fact that you can customize various aspects of each squad member, having a 12-v-12 on current gen was not possible in order to maintain COD‘s commitment to 60 frames-per-second. And, although Ground War is great on some of the maps, it still feels like some maps are way too big (That’s what she said. – Moody).

SHE FEELS GOOD (Because.. yeah! yeah!)

The new Xbox One controller feels as good as a very lucky night at Crazy Girls. It’s slightly smaller than the 360, but not enough to where it’s anything noticeable. The soft cushion triggers feel great when aiming down the sites and letting off a few rounds. Although Ghosts was said to have been independently developed for each platform, it’s mightily apparent that both next gen consoles didn’t give us the full potential of the systems. But who can blame then? Only time will tell (or when a possible/laughable “COD-killer” named Titanfall strikes) as to when the real power of each new machine will be unveiled. 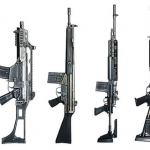 4 (out of 5) rifles. This Abbot didn’t get the game for free, nor am I reviewing this from a fan boy’s point of view. Like all games — not named “Duck Hunt” — there are issues, mainly spawns and some over-powered weapons. But if you have enjoyed every COD game since COD 4, then you probably already have this game turned on right now.

Activision’s Call of Duty: Ghosts for the Xbox One, PlayStation 4, PC, Xbox 360, PS3, and Wii U available now everywhere AAA FPS’ are sold.