“Father” Tyler McPhail: I don’t know about you, Eva, but I Comikazed all over this weekend.

Eva “The Priestess” Ceja: Better than what what you did for Halloween, I bet! 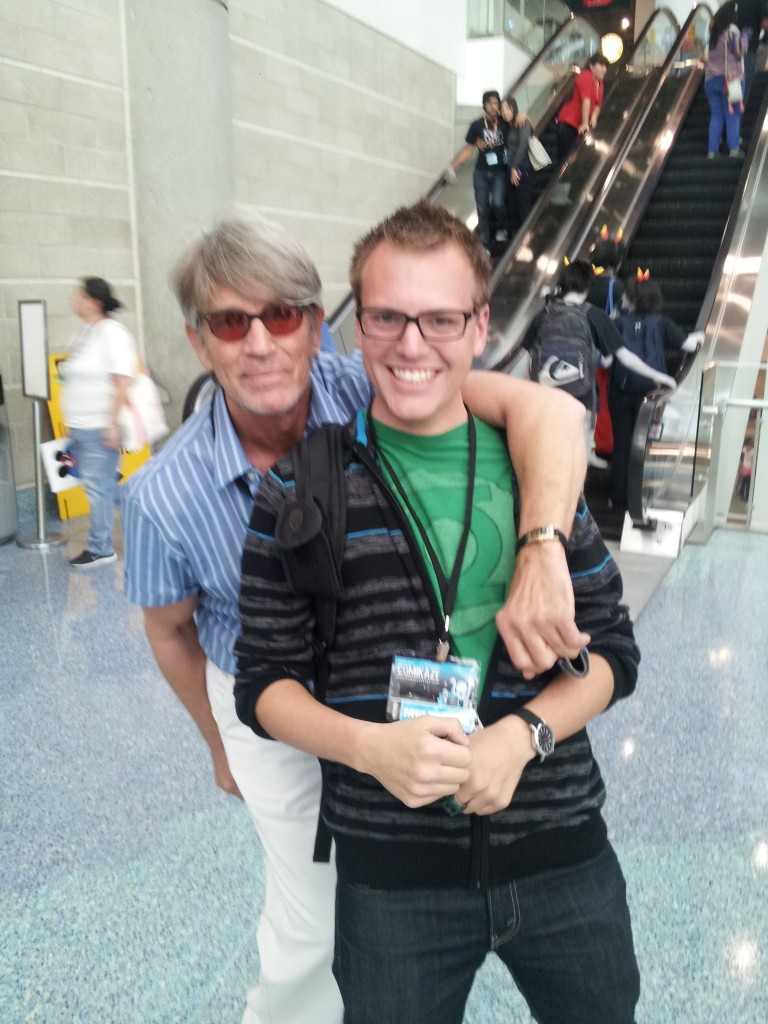 Ty: You mean.. work? Yeah, no drinking for me. Unfortunately. And since I love this other “job” and I saw more cosplay than you could shake a batarang at, there’s no argument there! Especially since we must all stand for our Lord, Stan Lee. OK… now sit. My Friday-through-Sunday at the Los Angeles Convention Center was one a hell of a time!

Eva: You mean you actually had fun at a convention despite the absence of camping? GHG, hear me out: are you all sure this is the great Tyler I’ve heard about?!

Ty: Haha…not much camping, but I had a lot of fun. It reminded me of why I loved comics, nerdom, Eric Roberts, and why I go to these conventions in the first place. Like I’ve said previously on my Twitter (@theMcPhailure) and in this week’s forthcoming podcast, Comikaze 2013 makes 5 cons that I’ve attended this year. So, where did this one rank?

Eva: Well, I’ve no idea.. since some would say I was too busy gallivanting around arthouses and film festivals and not the homes of geek culture. Or, more accurately, Mister Moody (yes I’m talking to you somewhere out there in your Boston Batcave), it was.. so to speak.. about damn time the Monsignor got the parish’s Royal Priestess “in the joint.” Thus, I’m here and couldn’t be happier! Comikaze was great! I saw Stan Lee! Met Ming from “Comic Book Men”!!

Ty: Haha! And we’re stoked to have you! Kaze was a reminder of what WonderCon and SDCC used to be…without the great Ming Chen. It was just about the comics, interesting panels, and the comic book fans. Stan Lee is definitely “The Man.” He was out and about constantly. It was like he was one of us, and you could tell he really wanted to make his stamp and have this convention be all about us: the nerds. I originally intended to attend only 4 panels, but ended up with 11, and the best part is that they were all fantastic panels. Each one was small, but had seats left over or standing space available, which is never the case at SDCC. The panelists and moderators were extremely excited and very interesting, some panels felt unplanned — which left it open for audience participation (that was awesome) — and the best part was that they ALL had me engaged the whole time. Kaze was just more of a throwback to what old conventions were like, and I cannot emphasize enough how thrilled the experience left me. My ONLY complaint was there weren’t enough booths selling graphic novels or trades. But that isn’t the con’s fault — just the exhibitors. 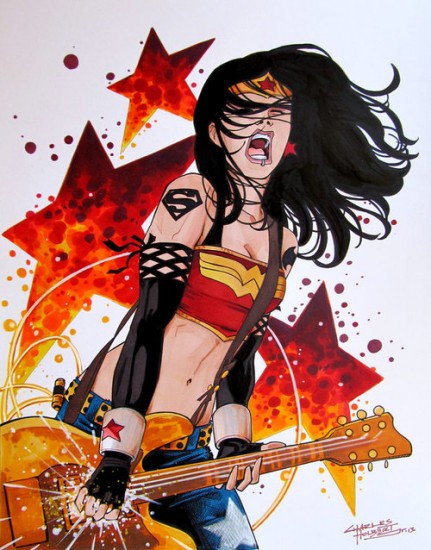 Rock out with ya Lasso out.

Eva: Maybe cause they got sick of Moody ripping them off? Lol. We kid, we kid! Not surprising, Father Ty, the panel I went to see Sunday was the all-girls panel, “REAL NERD GIRLS: Women Who Rock.” It was a pop culture discussion that spotlighted the likes of Holly Payne (The Death of “Superman Lives”: What Happened?), Laraine Newman (“SNL”), Clarke Wolfe (“AMC Movie Talk”) Bonnie Burton (Geek DIY), and Erin McGathy (Harmontown). Believe it or not, the burning question on everyone’s mind this Sunday afternoon was: how are awesome geek girls conceived!? It’s not like we are born and cultivated in test tubes and sent out to mate with geek boys… Uh, this may be true.. However! What hooked these ladies into geekdom?

Ty: Had to be dapper-looking guys who work at Disney who write horrifically funny reviews like this?

Eva: Close! Horror movies! Yup, parents. If you want your girl to turn out one of the cool girls on the block, then let her watch Poltergeist, Cabin in the woods, or Drag Me to Hell (but not You’re Next). Needless to say, Labyrinth, Time Bandits, and the James Francoless Wizard of Oz was what first took the panelists’ imaginations into far off realms and unearthly events — into a world where ANYTHING IS POSSIBLE… And it all went down hill from there. Lol.

Ty: Because for Miley Cirus, it was tag-team wrestling.

Eva: Something like that! Burton was a “complete Horror nerd who named [her] first dogs Chewbacca and Kujo, played with lightsabers, and watched “Doctor Who.” [And she] still loves unicorns,” whereas Wolfe was a “massive horror nerd, but started with fantasy like Wiz of Oz.” Wolfe was more “drawn to being scared, with an affinity for horror. The mini-series IT was the movie that started it all” for the now film expert. The panel’s passion for science fiction, horror, and fantasy spawned from an early age and now reflects what they currently do for a career. Lucky them!

Ty: So what did you learn about yourself?

Eva: Easy. Geek girls have a dark side. We are absurdist, at best. Strong loners in pursuit of something that will fill that void of absurdism that makes us complete. In this pursuit, as the panel suggested, we should support our fellow geek girls. It’s hard to be the only girl in a boys club.

Ty: And thankfully, with GHG, you have Sister Sherice and Sister Savanna for a couple (pretty) shoulders to cry on.

Eva: Makes life easier doesn’t it? The panel hit me like a ton of bricks like “Whoa!!!” Vampires. Rogue from X-Men. Buffy the Vampire Slayer (and my passion for kissing boys) started it all for this little nun. Not only was I voted “most likely to become a vampire slayer” my 8th grade year, but I was that misfit in search of something greater than myself. Oh, and the L.A.N.D. Parties I would go to….

Ty: Can’t get any more geeky than that…until you read a list of all the panels I went to, that is! 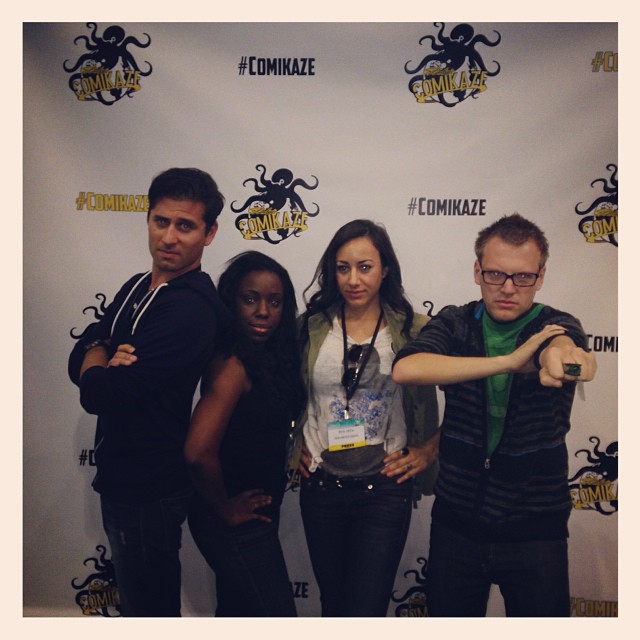 I swear “Our Father” kept his arm like that for nearly the entire day.

● Batgirl: Spoiled Live Stunt/Fight Event (which was awesome)
● The Stan Lee announcement for “Zodiac” (exciting stuff)
● Comic Book Live! with Chris Gore, Patrick Ian Moore, Tommy Bechtold, Justine Joli, and Markeia McArty (It was hilarious)
● Stan Lee’s Superhero Ball Wars Game (Looks like fun, so long as I’m not hit in the…)
● Adventures of Pete & Pete Panel (Nostalgic)
● The Death of “Superman Lives”: What Happened? (Can. Not. Wait. For. This.)
● TMNT Documentary (Another documentary I cannot wait for)
● Powerpuff Girls Reunion (I love you, Tara Strong, also you, Black Nerd)
● DC Vs. Marvel: the Debate (We talk about this in the podcast. Listen for more!)
● Party Like It’s Batman: 1999 ( I loved this panel, extremely fun and interesting)
● Wonder Woman- Why Can’t She Be Done Right, and What Can Be Done About It! (My favorite panel, I dig into this panel on the podcast, as well)

Eva: Whew! You went through more panels than NASA!

Ty: What can I say? This was one exciting year for me. I LOVE conventions and this year I attended five!

Eva: And only had to camp out for four of them…

Ty: Haha! Right? WonderCon. A fantastic way to open up this year’s wave of conventions. It was a decent size, had an even greater attendance, and a giant showroom. It had a lot of big media stuff at the booths that interested me and had great guests. However, something was not right about the showroom: it was trying too hard to be more like SDCC with overuse of the Hollywood stuff. It did not cater to the hardcore comic book nerds enough, which is why most of us were really there. The showroom was just weirdly planned. In fact, they separated the pop culture and film booths/exhibits and the comic book part on either side of the convention floor. To me, everything should be integrated. Have variety in the aisles. But, in the end, it was a fun weekend despite the overall lack of camping. 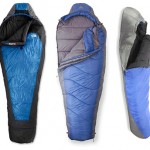 Anime Expo. I love Anime, I love conventions. I’m so glad this was my first Anime convention. It was HUGE. It took over all of the LA Convention Center. The showroom was huge and had variety; it had this amazing energy everywhere. The attendees were excited about Artist Alley, which is usually depressing. At most cons they usually just sit there with their heads down. Not at Anime Expo. They were as excited as we were. The panels were all interesting and entertaining. It was just straight up FUN. I didn’t ever feel tired or the need to “sit down for just a second.” I wanted to keep going to see what else it had to offer. My only complaint was the line situation for the panels. It wasn’t the convention’s fault, just the hired help; but because of it, I missed the Christopher Sabat panel. I’m still pissed about it…years later. 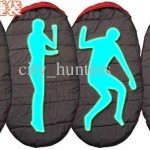 San Diego Comic-Con. Can’t put it in words. So much stuff, so little time, so much fun. The End. 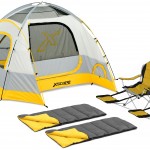 D23. Listen to the podcast. It is a huge universe with a HUGE following, but, sadly, it was a horrible convention. Nothing was there. Some of the panels were cool, but to take out Star Wars completely after you had announced it would have a big presence there? Wow, screw that. Also how about some more booths next time instead of just space? Embrace this “Disney Magic” you keep talking about. Also, the line situation was also the worst thing ever. 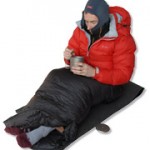 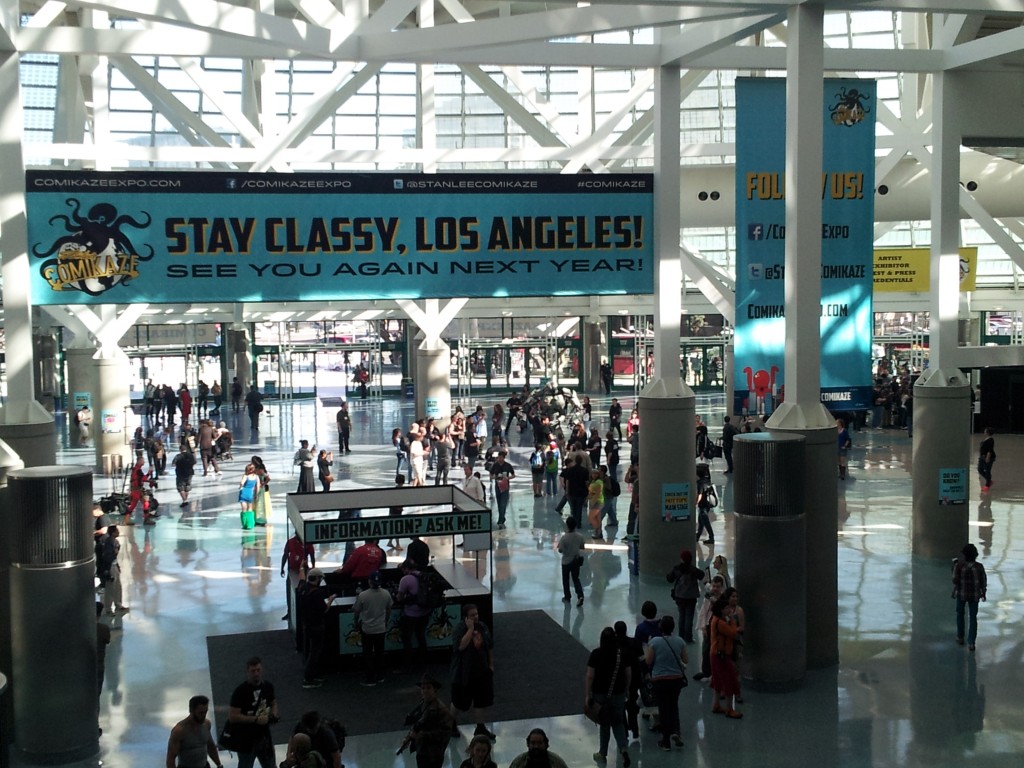 Stan, I love you, but LA is as “Classy” as Freddie Blassie.

If you just read our conversation above, then you know it’s great. It’s fun. It’s why I am happy with who I am today. 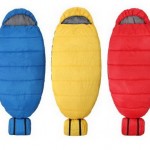 Previous: GL ANNUAL/DAMIAN [Review]: Is it ‘Lights Out’ for the ‘Son of the Bat’??!!?
Next: X-MEN: BATTLE OF THE ATOM [Event Review]: Attack of the Clones.

The moment when his Uncle sat him down to watch 'Star Wars' on Laserdisc at the age of 6, it was apparent that Myke was going to be a hopeless nerd for the rest of his life. Now he's hopelessly addicted to the smell of popcorn in the theater and isn't physically able to sit down through a movie at home unless it's on Blu-Ray or streaming at 1080p. Luckily for Myke, he grew up a Los Angeles native, and was surrounded by Art Houses, special screenings, places like the New Beverly, and the inevitability that more than 80% of film geeks in LA go from being film fans to trying to become filmmakers. Tweet him @onemyke and be sure to check him (& fellow Clergyman Derek "Divine") on The Fandom Podcast @ https://itunes.apple.com/us/podcast/the-geekdom-fancast/id806911850?mt=2