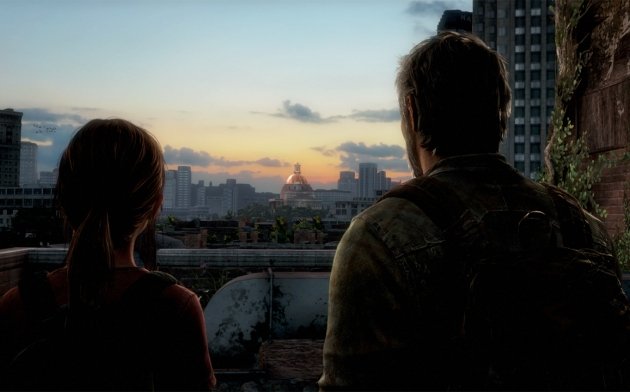 What happened to the future being flying cars, light-speed trains, and five-star dinners in the form of a pill? The future was supposed to be amazing! But this past decade, it seems like whenever someone makes a movie or TV show about the fate of humanity it’s always this bleak, terrible, post-apocalyptic wasteland. What’s wrong, people? Are we feeling so disappointed with the very anti-climactic end of the mayan calendar, that we just keep throwing around different ways we’d like to see the world come to an end?

Well if that’s the case, I throw my vote in for Naughty Dog’s newest masterpiece The Last of Us. I went in thinking this was a good old-fashioned zombie shoot ‘em up game, but boy was I wrong.

The Last of Us takes place about two decades after a plague has transformed the majority of the population into crustacean-like creatures bent on violently killing anything that isn’t one of them. We follow Joel, who after going through a terrible tragedy at the beginning of the outbreak finds himself now having to smuggle the 14-year old Ellie across the country. On their way, they not only have to fight those infected with the plague, but government officials, rebel movements, and groups of people who are just trying to survive.

These infected things go through a few different stages of the contamination taking over their bodies, so there are very different ways you have to deal with those who are at different stages of the disease. You can’t just run in shooting, you have to sit there, look through your supplies, and think of the best possible way to get through the area. And these monsters are pretty terrifying too. ‘Runners’ are infected that are just starting off, so they look mainly human, but are usually creeping up in one spot mumbling and crying to themselves as they slowly lose their shit. But if they become aware of you, well… let’s just say they don’t call them darn runners for nothin’. The primary antagonists you’ll see all over the place are ‘Clickers’. The infection has grown into their skull, and covered their eyes, so they’re blind, but they’re constantly clicking, using echolocation to find you, and rip your larynx out.

There are others, but the infected aren’t even the worst of your problems.

The non-infected humans are just as bad, if not worse, since they have all their senses and logic intact, and are usually actively hunting you. It’s all very “Walking Dead”, where these infected things are more of a very dangerous inconvenience, while the human population are the real threats. At 20-years in, everyone has either had their entire lives ripped away from them, or were just born into this terrible world, giving them nothing to lose.

Probably my favorite thing about the game is the way the controls and gameplay actually make sense. Unlike most protagonists in gaming, Joel doesn’t have amazing Wolverine-powers, like automatically beginning to heal after being wounded. You have to physically go and find a health kit in the ruins of the cities. If you can’t find one, then you’ll have to make one using the alcohol and rags you find throughout the game. And Joel doesn’t just select it and feel all better, it takes real-time to pull it out, and actually apply it to your wounds, which is a lot more stressful when you’re being shot at, or an infected human is running towards you. There are a bunch of other instances where gameplay mechanics make actual, real-world sense, and these all add to the game’s amazing realism, and the player’s sense of constant anxiety.

And the anxiety! There was a point in the game where I was trying to sneak past a room PACKED with clickers and runners. Unfortunately the last one noticed me, and screamed at me (alerting the others). So I just booked it to the exit. Once I got to the next room, two or three other clickers were waiting for me. I then panicked, emptied my shotgun into them, and was finally able to breathe for the first time in about 10-minutes. I haven’t felt this level of anxiety since I was a tike coursing through the original Resident Evil‘s.

It’s as if I nearly forgot what it was like to be that scared by a video game not named Star Trek!

This brings us into the cinematic aspect of The Last of Us. The acting on this game is awesome. Seriously, better than most movies I’ve seen lately, this side of Fast & the Furious 19. Ha! This Minister genuinely sympathizes with both Joel and Ellie, and during different parts of the game, have had to play as both. Naughty Dog nailed what an AI video game companion should be. Ellie is helpful in a fight (similar to Bioshock Infinite’s Elizabeth), doesn’t die easily, and her sarcastic wit is wildly entertaining (even if it pisses off Miss Paige). She also serves as a great fresh set of eyes on this destroyed wasteland of a world — since it’s the first time she’s been out of the quarantine gates. Instead of just blindly following around your general movements throughout the game, Ellie walks into a house or other abandoned building with you, and inspects different elements of the area, with her own usual commentary.

This type of dynamism turns some already excellent gameplay into blissful cinema. I once lost track of Lil’ El for a second in a new town, turned around and she was looking at an ice cream truck, and then asked what it was. The dialogue from there was literally explaining “Yes Ellie, before the infection people used to literally drive around in a truck, and sell ice cream out of it.” The world we take advantage of today being so alien to her can only make us sympathize.

However, there’s more cursing coming out of that 14-year old’s mouth than a Reverend Rivera blogcast. Usually, profanity in games and movies nowadays feels pretty forced, like the director is trying to be “fucking cool” or whatever, but when a Clicker pops out of nowhere, the only realistic response is.. “Oh, fizzuck!” My favorite Ellie quote in the game actually isn’t her cursing, but whenever you overkill either an infected, or a human, homegirl just shouts, “Jesus, Joel!”

It just sounds so genuinely like “What the fuck, man? Was that really necessary??”

Lastly, this Minister approves of all the puzzles, and different styles of gameplay one has to shuffle through. For a sec’ I’m looking through a town, the next I’m stationed behind a sniper rifle clearing a path for my little group. Then, suddenly I’m on a horse, or shooting at infected while upside down. But these aren’t just thrown together, these processes actually make sense as you go from one point in the story to the other. Situations like this would naturally occur if you were living in this shitty world (as sometimes they do in Hollyweird, anyway..). And instead of just slapping a cinematic cutscene or mindless QTE there, Naughty Dog would rather challenge you to fight right through it than sit around or press one button.

The ending is not what you’d expect, either, but once you get through it, it will make a ton of sense. You’re dealing with a pair of very flawed individuals who spent the last year fighting through a complete nightmare together. Don’t expect a chariot off into the sunset.

But The Last of Us should leave a lot of lucky players thrilled, for this is by far the best game I’ve played in a very, very long time.