Words couldn’t ring truer for the latest World Wrestling Entertainment video game adaptation, WWE 2K14, which offers players a go at some of the greatest moments and matches in the fed’s “30 Years of WrestleMania.” The new story mode, which takes a cue from last year’s “Attitude Era” Mode, packs plenty of challenge (good luck beating The Rock the second time out with Cena!), superb promo packaging (just wait ’til you see the Mega Powers explode!) and eye-opening OMG! moments (like The Phenom going all “Air Taker” on that ass!). 2K had no issues in capturing all of the greatest Mania moments down to the finest detail. Of course, all of the action can only be boosted by the call of “Good ol’ JR” Jim Ross and Jerry “The King” Lawler. Even if the game does place them stealing a moment or two from Gorilla Monsoon and Jesse “The Body” Ventura during the mid-80s Manias, its their dramatic commentary that makes each of the five eras worth playing over and over.

This game has Mr. Fuji, man! And, just wait until you see his inane challenge to “The Immortal” Hulk Hogan… 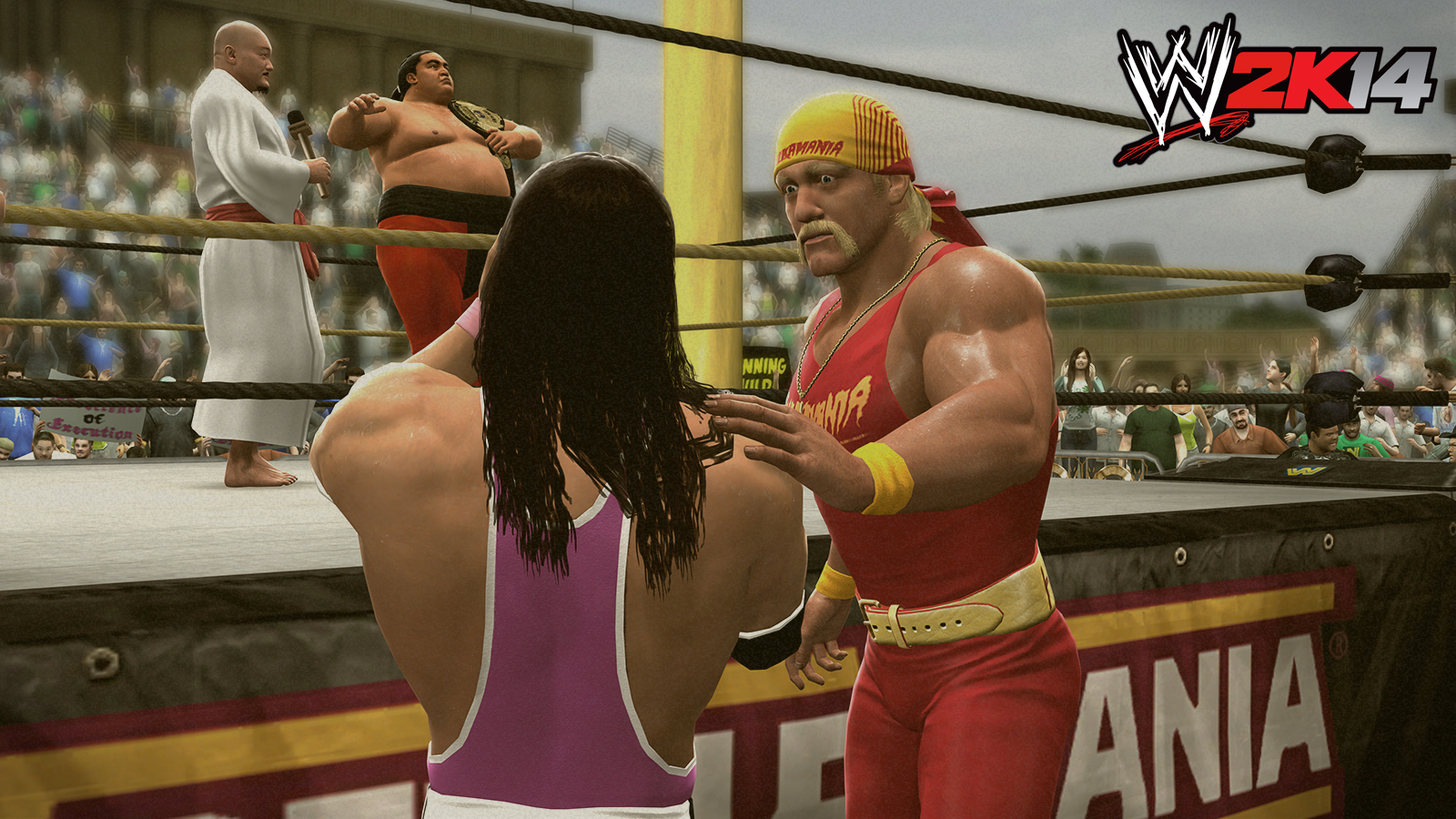 Playing the earlier portion of “30 Years” reminded me of Super Wrestlemania for the Super Nintendo, except with entrances, finishers, signature moves, and a much larger Yokozuna. OK, so maybe nothing, except now that the Monsignor gets to play with a good portion of those wrestlers I so cherished over 20-years ago. Sure, you might not remember Andre the Giant or King Kong Bundy having entrance themes back then (how awesome is seeing Andre and “The Brain” get pelted by trash from fans, and how awful is Sgt. Slaughter’s Iraqi-turncoat drumroll?), any 235-pounders belly-to-belly suplexing and piledriving the likes of “The Big Show” with ease (there’s weight detection, but how much?), and, as expected, there are at least two versions of every super popular wrestler in this game (one with the mullet, and one without).

With regards to all of the outstanding detail added this season, like the clear absence of auto-reversals on every submission (now we can try to snap a players arm without worrying the match take a turn for the worst) and hilarious signs like “You Suck” (for Kurt Angle’s glaring absence?) and “Paul Wight” (the hell?), there are glitches too, and that’s to be expected. Yukes has had to patch the franchise quite a bit during the 2-years it worked alongside THQ developing the game, so if you see Hogan treadmill-sliding into a downed Ultimate Warrior, or even fire floating in the ring after an ignited table is smashed to bits.. don’t freak out too much, OK? 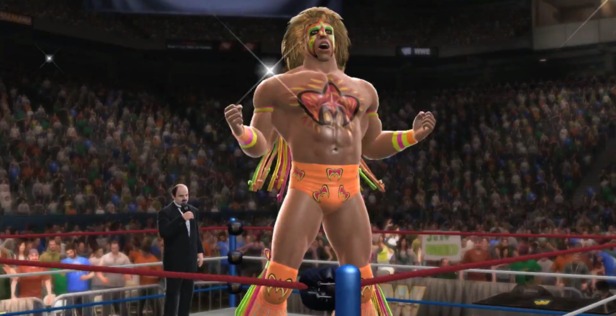 Players will respect the up in presentation and production value as they tour the WWE’s lengthy Mania history. There are even reimagined interviews before matches during Mania mode, something that’s been absent in a WWE game since the WWF WrestleFest arcade. You’ll lavish in the wondrous outdoor venue of Caesars Palace during the WrestleMania IX match between Yoko and a much more accurate-looking Bret Hart. Yup, “The Hitman” no longer looks like the in-shape Canadian combination of Howard Stern and Andrew “Dice” Clay. In fact, while 2K14‘s graphics are nowhere near the level we’ll witness in a future wrasslin’ title on an Xbox One or PS4 (now there’s a thought that’s exciting), the wrestler detail is much better this time out. I can’t imagine too many people making Create-A-Wrestler’s (CAW) of the in-game roster just because “Yukes didn’t get it right.” Especially during “Comeback” cues, many of the superstars link together signature moves in the squared-circle as fluid as they do on RAW.

I had perhaps the single greatest match in my lengthy wrestling game-playing career — which spans nearly 30-years itself, hi Kin Corn Karn! — when my Razor Ramon confronted the “Heartbreak Kid” Shawn Michaels. Oh, just an Intercontinental bout many would argue was the greatest match ever. During my rendition, there were at least 5 Razor’s Edge suplexes applied to Shawn, while the “Show Stopper” lit me up for several slingshot crossbody’s and even a ridiculous moonsault from the highest peak of the ladder. Looking back at the history of WrestleMania, Michaels is arguably the thread that’s kept this whole damn thing together. 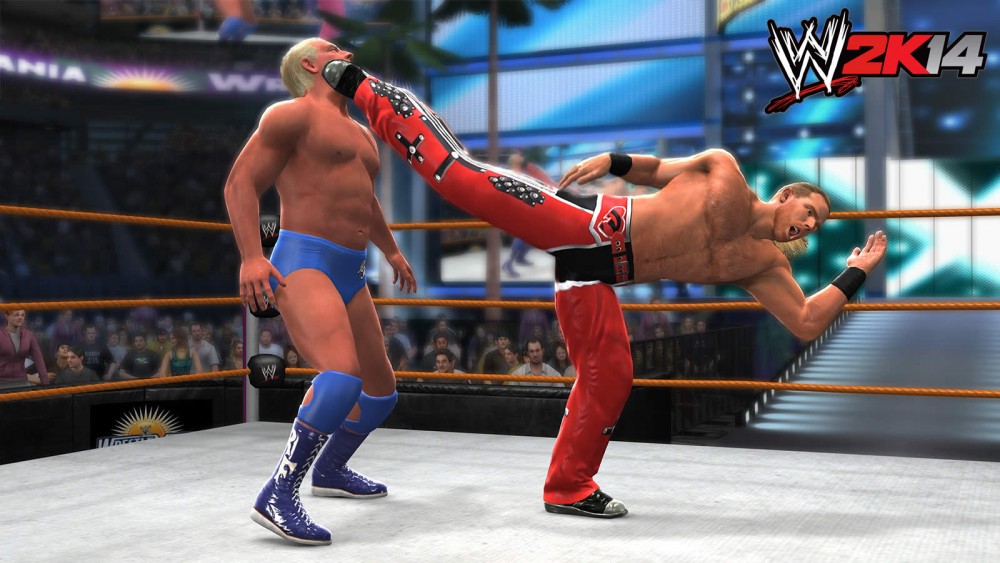 Battle for the Sexiest Man at the Home Depot lives on!

While Hulk Hogan roared up the 80s (and even the 90s in dubya-cee-dubya), and the Attitude Era was clearly dominated by The Rock and Stonecold (you will witness these two battle each other for the Mania trifecta), clearly, it was HBK who set the precedent for guys like Y2J, CM Punk and even his pal Triple H. Edge’s spear to Mic Foley on a table corrupted by flames? HBK. He was the legend killer before the “Legend Killer” and WWE 2K14 is all the better for it. Even if Shawn never beat “The Streak,” a new mode in which players can either attempt to end Undertaker’s 21-0 WrestleMania winning streak, or defend it as the Dead Man, he remained relentless, retiring his good friend Ric Flair, keeping Degeneration-X alive, and becoming the key “special guest referee” during many of Mania’s key battles (as Shawn even did during last night’s Hell in the Cell). The game so much includes those “special” refs — other than Charles Robinson a.k.a. “the old Zack Morris”, who refs every other match — and accompanying managers, like Paul Heyman (who are no longer relegated to playable wrestlers), making the experience as real as it gets.

Now, as far as this year’s Universe Mode is concerned, there is no “heart breaking” news to report thus yet. After you spend hours customizing up to 100 wrestlers (now, the congregation can finally make 50 Marvel and DC super heroes!), rings, entrances (where “motion assignments” can now be arranged), attires, themes (such as my preference for RKO’s older song), belts — or minutes downloading them on Xbox Live or the PSN — Universe offers a far superior slate of options in 2K14. The menu offers a swift change of programs, rosters, and storyline options like whether tag-teams can break up or automatic rivalries can be made. Because of this, players will no longer need to rush to their favorite message forums to complain there are no more cutscenes between wrestlers not from storyline mode (i.e. WWE 13’s “Attitude Era”). 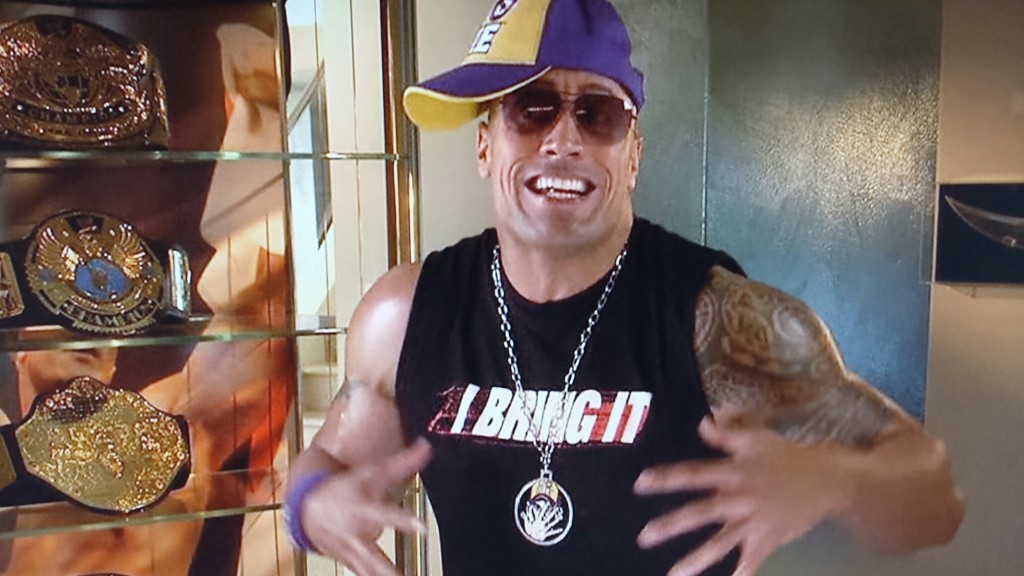 My first RAW show (which can now have a customized length from 5-7 matches) opened up with Seth Rollins trying to handshake the Funkasaurus; Ryback leaving his match with Punk, only to come back; and a very-crowd pumped Daniel Bryan getting nailed at the end of his match by a slithering Randy Orton with the WWE title. While you still can’t take the matches backstage or in the crowd, the arena sounds a lot more active this time out (you’ll hear random chants through various matches). It’s basically what you’ve been watching every week in “real” life, except with the majority of matches turning into a counter-fest (better than button mashing, or Street Fighter combos, though) and even worse commentary from Michael Cole, which is impossibly hard to believe. His calls with “The King” remain shit, despite the fact this game was brought to you by the same folks who make NBA 2K‘s commentary “The Best in the World.”

In addition to even more solid gameplay news, like a more fine-tuned pin meter and now having the ability to “catch” opponents in a wide array of moves and finishers (i.e. “The Rock Bottom” coming from anywhere), Universe also offers plenty of new rivalries (which can be set to length), upsets, and other shocking moments. These instances are now reported in a cleaner fashion to the WWE.com menu, like Antonio Cesaro’s budding competition with Diesel when “The Real American” replaced the same opponent he attacked on the entrance ramp during my newly created nWo Saturday Night. 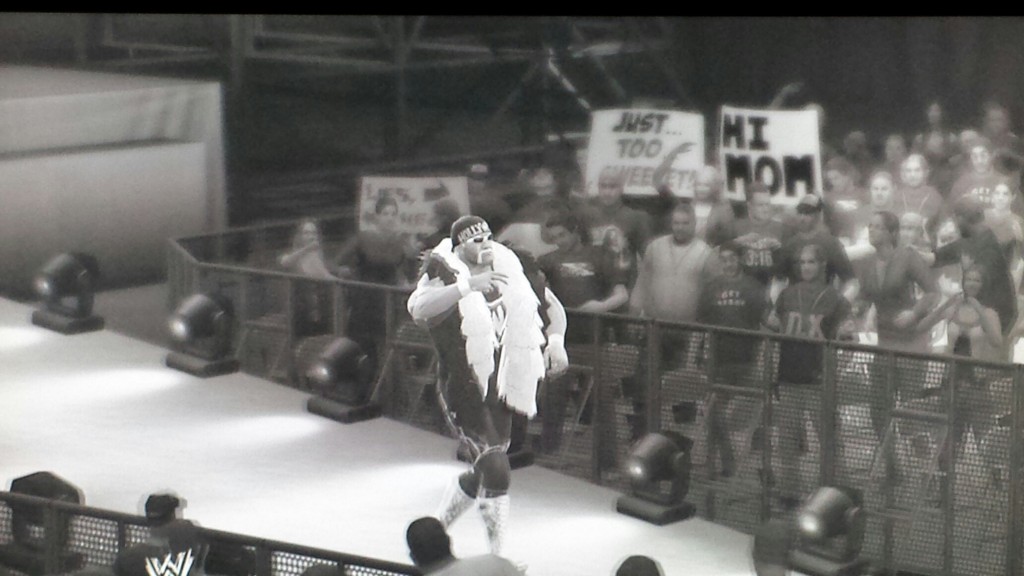 As Hollywood as a Nursing Home gets.

And, oh, by the way, the New World Order is also on its way via DLC, with playable nWo superstars Hall & Nash, Curt Henning, SyxX-Pac, Mach, Scott Steiner and others coming in November, while your “Season Pass” can also earn you the rights to newbies Fandango and “Big E” Langston (with the sure glaring absence of RVD, Uso’s, Curtis Axel, and Wyatt family, sure…), the Bella divas, and legends Bruno Sammartino, the “American Dream” Dusty Rhodes (with hopefully his son Goldust soon to follow), “Ravishing” Rick Rude, Jake “The Snake” Roberts, and even Comic-Con whore, Virgil. You’ll have no choice but to feel like that kid with all the wrestling figures again.

Whether Universe Mode keeps those dreams alive is only a matter of time, and that’s why we’ve got our official WWE 2K14 Podcast coming in another week or so. There’ll be plenty more of Universe to investigate, CAWs to download, online match frame rates to check, and hopefully no weak servers to report. We hope you’re as psyched as we are. 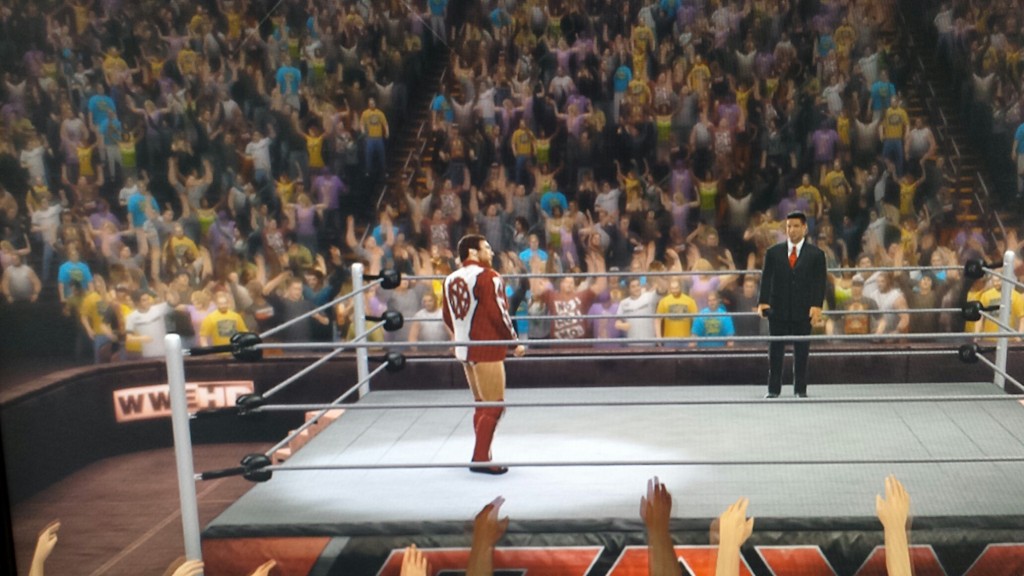 While 2K, Yukes, and Visual Concepts by no means completely flipped the script with their wrestling title debut, the company made enough fresh adjustments that should keep diehards busy throughout the next year and more. The roster of 84+100 CAWs is beyond our deepest imaginations, WM 30-Year mode may even be worth playing over, and we’ll be retired in the Creation Suite longer than Sting’s refusal to sign with Vincent Kennedy McMahon. Even with all the game’s little annoyances (bugs, displaced commentary, strange A.I.), with the entire history of the WWE at your disposal, there’s no better time than now to get back into the ring.

“If you want some, come get some!”

Previous: BATMAN – ARKHAM ORIGINS [Review]: ‘Twas the Dark Knight before…
Next: GL ANNUAL/DAMIAN [Review]: Is it ‘Lights Out’ for the ‘Son of the Bat’??!!?